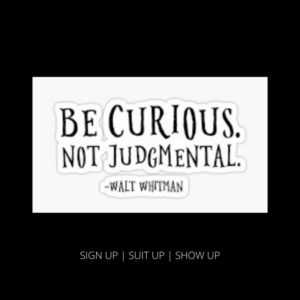 Curiosity is a powerful tool

It’s  fuel behind the engine that has helped me in my professional life.

Curiosity has enabled me to transfer my skills from one career to the next. That and a genuine love for people has helped me to network with – and learnfrom – the best.

Curiosity is powerful because it leads to a conversation, a connection, even a promising opportunity!

One of my favourite TV shows is Ted Lasso mostly because of a main theme throughout the show is curiosity and Ted often reminds us through this show to “Be curious, not judgemental” as originally said by Walt Whitman, an American poet, essayist, and journalist and humanist who lived during the 1800s.

Here is a monologue from Ted that impacted me as a lover of curiosity:

“Guys underestimated me my entire life. And for years, I never understood why. It used to really bother me. But then one day I was driving my little boy to school and I saw this quote by Walt Whitman and it was painted on the wall there. It said: ‘Be curious, not judgmental.’ And I liked that. So I get back in my car and I’m driving to work, and all of a sudden it hits me. All them fellas that used to belittle me; not a single one of them were curious. They thought they had everything all figured out. So they judged everything, and everyone. And I realized that their underestimating me…who I was had nothing to do with it. Cause if they were curious, they could’ve asked questions. You know? Questions like: ‘Have you played a lot of darts, Ted’ To which I would’ve answered: ‘Yes, sir. Every Sunday afternoon at a sports bar with my father, from age ten til I was 16 when he passed away….Barbecue sauce.”

So I ask you, are you using curiosity instead of being judgmental?

It may make a BIG difference in the way you perceive someone else and help you to appreciate their story.