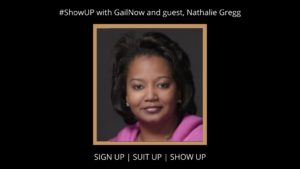 I recently had the privilege to interview Nathalie Gregg on my show, #ShowUp with GailNow live.

She and I met on my favourite social media platform (Twitter) and really through networking, we became friends.

Nathalie is a Change Agent, Enterprise Leadership Strategist, Adjunct Professor and Speaker. She empowers women to become their own economic engines through mentorship, sponsorship and alliship. She is the founder of the #LeadLoudly Movement & Twitter Chat, where she inspires women to be bold, confident and fearless to drive results. Nathalie has written a book called, Leading in Stilettos.

We spoke about many things, but here are some highlights: curiosity, networking, women empowerment, women in leadership and supporting other women.

I have always been curious, which led me into journalism. I now use storytelling (developed as a journalist), in the manufacturing world. Curiosity, along with my transferable skills has assisted me as I transitioned from journalist, to bed-and-breakfast owner, to fundraiser, to Marketing Manager at an insurance tech company and now, “Chief Curiosity Officer” at GailNow.

It is the foundation of my 3 step process: Sign Up, Suit Up and #ShowUP which helps people show up and share their stories.

Curiosity has enabled me to reinvent myself many times (I’m on my 5th career), implement changes, step out of my comfort zone, overcome fear, do things I’ve never done before, meet amazing people and ShowUP with joy, passion and enthusiasm.

Here’s what Nathalie had to say about this principal that is so near and dear to my heart:

“For me I feel like curiosity plays a very interesting part in my world, you know, on the leadership side, but also too on the technology side, because leadership and technology for me kind of blends together as far as getting my brand out there, and also coaching and consulting with a high performance team. Because if we’ve learned anything in this pandemic, leadership and technology are key, and it’s getting faster and faster and faster and I’m always curious, by why people do things, you know, from Simon Sinek. You know, “What’s your ‘why’?” And what do you want to do as a result of this? Why? You know, you’re the queen of curiosity. And so you want to drive innovation that drives results. So that’s what you do. “

Something else that is a huge part of both our lives is networking. It has allowed us to meet many people who have impacted our lives and helped us both develop into who we are today. The dictionary defines networking as follows: the action or process of interacting with others to exchange information and develop professional or social contacts.

Networking can be an excellent source of new perspectives and ideas to help us become the best versions of ourselves. Also, exchanging information on challenges, experiences and goals is a key benefit of networking because it allows one to gain new insights that you may not have otherwise thought of.

These are the thoughts we both shared on the foundation of our friendship:

Wow. That is such an amazing story. Thank you Natalie for sharing. As you know, I talk about storytelling, but also networking – the power of networking. Obviously how Natalie and I first met was through virtual networking, so, . So  that is great.  Aus about how you’re changing though, to step into that spotlight and a lot of people think selfies aren’t of value. I think they’re of extreme value because I have met amazing people because I put my face out there and connect with people. What is your story about selfies?

Shout out to Rebekka Tozer,   who is a phenomenal photographer. She is amazing at what she does with photography. She actually did a selfie class, all making standout selfies, and also making stand out selfies that also aligned with your brand. And so I was like okay, I need to do something different. I don’t necessarily like taking selfies. But  let’s challenge myself to do something different so I can start to live more of my brand.. ,  It is so interesting: when I was working with Maiko Sakai  and she was actually on the #LeadLoudly  Twitter chat a couple of weeks ago and she was talking about knowing your niche and niching down and what are those types of things that you want to be known for and you know, going completely down in that niche. And I thought I was a community builder but I happen to be something else.( My Way All the Way!! )and so creating those selfies and continuing to talk about the brand and leadership and those types of things really helped me take my brand further and actually decrease some of the challenges I had with taking selfies.  Also  being seen on camera and dealing with that imposter syndrome.

Both Nathalie and I are great advocates for women in the workplace, women empowerment  and women in leadership. Women empowerment may be defined in several ways, including accepting women’s viewpoints or making an effort to seek them, raising the status of women through education, awareness, literacy, and training.

Nathalie shared an interesting story about her love for the RESPECT song, released by Aretha Franklin in 1967. Upon release, the song quickly became a rallying cry that vulnerable groups, most especially the civil rights and women’s rights movements, took on as an anthem, since it voiced the crucial message that all our voices deserve to be heard. At 5 years old, all Nathalie knew is that she needed to be shown some respect:

“RESPECT goes back to me being five years old. When I would get upset with my parents, I would stand on top of the piano stool, and I would bellow out RESPECT!  So, interesting that it  was really considered the first song of the women’s empowerment movement. And Aretha Franklin actually recorded that song on February 14 (Valentine’s Day) and my beloved father passed away on Valentine’s Day. So, it means so much to me in so many different ways. Because right after he passed that’s when I wrote the book “Leading in Stilettos because it was the first release of my passion and my love for business and women’s empowerment.”

Many women face discrimination in many places, including the workplace. There’s something called the Queen Bee Syndrome and for those who don’t know what it is, here is the definition: “Queen bee” is a derogatory term applied to women who have achieved success in traditionally male-dominated fields. The syndrome is displayed as these women often take on “masculine” traits and distance themselves from other women in the workplace in order to succeed. They may also view or treat subordinates more critically if they are female, and refuse to help other women rise up the ranks as a form of self-preservation.

“It’s so interesting that you brought up that story because as I was preparing last night, something said you need to talk about the queen bee syndrome story. And I’m like, I don’t know if I want to talk about that. It was so interesting; I had two mentors and I had the ability to work with on several different projects. And one of the mentors was actually the supervisor to the other reporting mentor. And they decided that they were going to bring me on to a position and I had an appointment set with the person who was going to be my first report. There were numerous years where I watched her literally take over companies and organizations and you name it basically, I knew where the bodies were buried. And so when she interviewed me, I noticed that her personality and her behaviour started to change. As the interview went on she said, “You’re overqualified for this job.” I said, “Okay, but I’m still interested because I want to work with you two amazing ladies; I know we can do some incredible things together.” This had to do with a Women’s Leadership Project and she said, “You qualify for my job; not for this one.” I was really flabbergasted. So, when I left their office, I called my male advisor, and he said, “You don’t understand what’s happening.” I said, “No, I don’t have a clue.” And he said, “You are no longer the mentee; you’re now the competition.” I read a book that included a piece about the Queen Bee Syndrome and I realized that’s exactly what’s happening to me; I’m no longer the mentee. I’m now at the competition. And interestingly enough, I had to really lean on my male mentors and advisor to kind of psychologically pull me through this because it really hit me extremely hard. I’ve known and trusted both of these women for decades and to have that happen. I really had to work on my psyche and my mindset to keep going and to keep having a positive attitude towards her because I could not allow that feeling to grow in our relationship. So, what I did was, I started putting into my presentations about leadership and women’s leadership and Lead Loudly. I also started talking about Queen Bee Syndrome; what it looks like when it shows up. Not only what does it look like, but what do you do? And I think that’s the next step as knowing that you have a safe place to land and that you have mentors and advisors and allies that will help you get through it. And this is only a bump in the road. It’s not the end.”

Something that both Nathalie and I highlighted during our discussion is that it is important that we, as women, support each other.

Oh, I say sometimes we as women, we’re our own worst enemy. Because we’re so critical of not only ourselves, but also other women. Let’s support each other. Let’s cheer for each other. Let’s get in there and because as we help others win, we win as well. We need to change the game on that; we really need to do better.

As we both embody these principles, we realize one thing: no man (or woman) is an island and we should all strive to be curious, not judgmental as we look to pour into the lives of others, lift each other up and support one another as we build our community of diverse people who each bring some value to the table.