Once upon a time …

A start to a story.  A beginning. Often involving a reflection back in time.

We know fairytales and fables are often the basis of stories we continue to tell among friends, co-workers, peers and now in blogs, on LinkedIn, Instagram, Facebook, Twitter, Tiktok and a multitude of other social media platforms.

Aesop lived in the 500s B.C., but his stories were remembered for thousands of years without a single shred of paper or other printed material.

Now THAT is the power of storytelling.

Oral storytelling was and is powerful.  Aesop’s tales are so well remembered, that even 300 years after his death the stories became part of a mass production of storybooks.

According to blogger, entrepreneur and publisher Tom Corson-Knowles, stories are central to human cognition and communication. “We engage with others through stories, and storytelling is a lot more than just a recitation of facts and events.

As human beings, we are automatically drawn to stories because we see ourselves reflected in them. 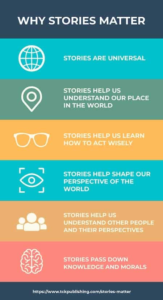 We inevitably interpret the meaning in stories and understand ourselves better.

But we now live in the fast-paced information age, where information, concepts, and ideas continuously bombard us from every direction. Do stories really matter to us anymore?”

Well, as a matter of fact… Yes, they do.

There’s something about a story – the compelling scenarios, the vivid descriptions – that fire up and fuel our imaginations.

We probably don’t understand how impactful the art of storytelling is, but to put into context, we carried that concept with us even when we played with our toys.

I remember playing with my Barbies when I was a little girl, and making up all sorts of situations of the mostly female community – Barbie  and Midge – Barbie’s best friend – were the leaders and then Ken was also showing up and causing a bit of a stir!  I still have my Barbies – and oh, if they could talk, I am sure some fascinating stories of young Gail’s vision of the world would be entertaining. They definitely shaped a great part of my younger years  and certainly played a part in my love of storytelling to this day.

Maybe you found  stories in  early Marvel and D.C. Comic books with Superman, Batman and Spiderman and ran through brave, protectionist fantasies where they were the defender of good vs. evil, where they walked in the shoes of their heroes, albeit temporarily.

Sure, it was fiction…but what good idea hasn’t started with someone’s imagination and evolved from the intangible to the tangible?

Just as stories serve as great connectors, giving you the tools to make friends, they can make  life intriguing, interesting and even magical.

Great storytelling allows us to relate to others – and depending on the circumstance, triggers our emotions for good or bad.

According to Harvard Business,  researchers have found that stimulating the mind with great tales creates a chemical reaction within the brain, releasing such memory stimulants as cortisol (which allows us to recall and recollect); dopamine (which is linked to our passion and keeps us focused)   and oxytocin, which is a sympathy catalyst – and a significant component in building, developing and retaining connections.

Telling the right story can be instrumental to your business’s success.

In this year of COVID, 2021, where direct and intimate social interaction is frowned upon – at least until all the vaccinations have been distributed and administered – the idea of sharing stories over a coffee, a beer or on a convention floor is being replaced by the newest group of tools – social media.

And there is more power there than you might realize, whether it’s being texted, tweeted, posted or communicated by video.

The beauty of the internet is that – quite literally – the world is your oyster. There are few barriers stopping someone from Germany or Ireland stumbling across your message – and the ripple effect can be powerful.. If you don’t end up with a larger audience that you intended, you’ve at least been given the access to reach one – and what you do with it is up to you, in terms of the impact you’d like to make.

On Virtual Speech blog, writer Sophje Thompson (https://virtualspeech.com/blog/importance-storytelling-business ) gives examples of how telling stories helps sell a brand.   Think Apple, Spanx and Microsoft.« Using storytelling in this way helps the audience to connect with you so they trust you, the human, and therefore they trust the brand. This is especially the case when the story is very relatable, which also has the added benefit of being easier to understand and more memorable as it’s personally relevant – the audience can see themselves as the character in the story. »

Stories matter.   They have the power to go far beyond charts,stats and data.

“Tell a good story so you show your company’s personality and humanity – don’t just become a faceless company that consumers feel unconnected from and uninspired to interact with and buy from,”writes Thompson

And sometimes a story can take on a life of its own. A really recent example happened during the U.S. election.  As we all know, U.S. President Donald Trump lost the recent election to now U.S President Joe Biden. There was some real concern that the Jan 20 inauguration ceremony might be a repeat of the January 6 attack on the Capitol in Washington, but luckily, cooler heads prevailed.

And what was the most lasting impression taken from that peaceful swearing-in of Joe Biden? You might say 22-year-old poet Amanda Gorman’s inspiring poem – and to be sure, she certainly got her fair share of attention.

But even bigger was the unlikely photo of Democratic Senator – and one-time Presidential hopeful – Bernie Sanders, sitting in a chair with legs crossed, masked up and wearing a pair of mittens.

Now, chances are that if you’re on Facebook, Twitter, Instagram, Tik-Tok, Reddit or any other platform, you’ve seen one of the endless variety of memes that have depicted Sanders in every situation imaginable – and a few probably unimaginable – as good-natured affection has made him the most popular person on the planet – at least for a few days following the inauguration.

That, my friends, is the power of social media – and if you can capture that type of lightning in a bottle, which is difficult – but not impossible to do – you can command similar attention to your product and business.

And the best tool to achieve this?

It’s more meaningful to put a face or a name to a narrative or an anecdote than just rattle off statistics. A good story is memorable and retainable, plucking the heartstrings and encouraging people to react and participate, appealing to the human within.

As much as logic may dictate action, it’s often emotion that persuades people to act. People  can personalize and adapt the story to their own needs and interpretations, and perhaps rekindle an emotion that they had forgotten.

The audience feels the story – and are more likely to remember the message because they feel it. The best story persuades the rational brain but resonates with the emotional.

Take for example, the ALS Ice Bucket Challenge – do you remember that one? It began back in 2014 in an effort to raise awareness and funds for those inflicted with Amyotrophic Lateral Sclerosis.

The challenge was simple – dump a bucket of ice-cold water over your head, challenge three more people to do it and make a donation to the ALS Association.

If you recall, this campaign caught fire on Facebook, Twitter  and YouTube as celebrities ranging from Bill Gates to Oprah Winfrey to Rihanna and Tom Cruise all took the challenge.

You want some harder figures?  According to Semrush.com, 1.2 million videos of people dousing themselves with ice water  were posted on Facebook, with 15 million more people reacting with a like or a comment or a post. Also, there were 2.2 million mentions of it on Twitter.

But how truly effective was it?

In just eight weeks, 17 million people rose to the challenge and raised $115 million dollars U.S. for the ALS Association.

Why was it so effective?

It was a fun challenge and for a good cause, requiring very little effort or time.

If you want a practical application to a piece of merchandise, look no further than Roman Originals. You may not be aware of the name, but remember the blue dress vs. yellow dress debate from a few years ago?

It grew from a wedding photo posted online, where people had trouble telling the colour of a dress that a woman was wearing as she stood beside the bride.  According to Hubspot, the U.K.-based retail was hoping to sell 200 dresses a week based on the campaign.

Everyone became intrigued by the debate of dress colour and engaged through social media to the point where the campaign became an astronomical success.

If you can engage your audience properly, hopefully the results are organic.

Those are just a few examples of stories that benefited their marketers, because it involved and engaged them.

And if you do it right, similar results can be the happily-ever-after for your product.

What is your story?